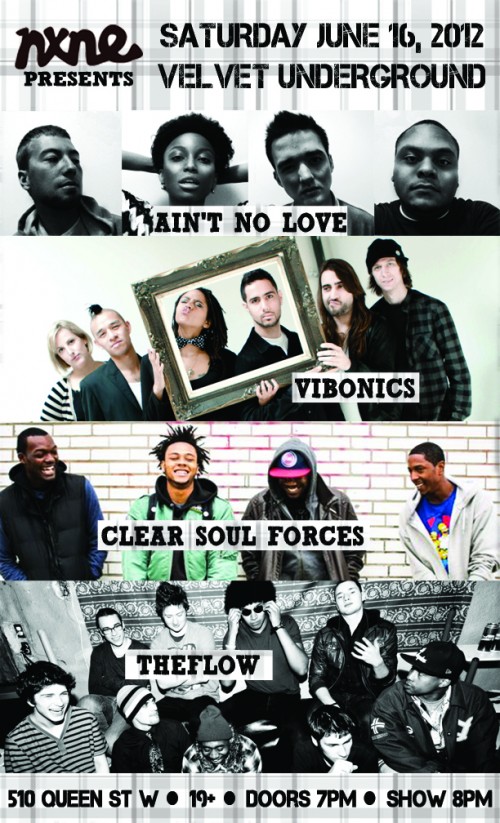 The last place any artist wants to be is in a box. Four groups who stand against all things cube shaped are combining forces at this year’s NXNE Festival on Saturday, June 16th at the Velvet Underground. Montreal/Toronto-based Ain’t No Love are two emcees (1990 & Beanz), a singer (Saidah Conrad) and a producer (Love Thy Brother) who have taken their hip hop/soul/dubstep mash-up to the world stage, having rocked Halifax Pop Explosion, POP Montreal, and SXSW all in the past year. Toronto hip-hop-funk-rock band Vibonics are a six-piece fronted by singer-emcee combo Kubota and Crossword, who recently completed a western Canadian tour to follow their showcase at Canadian Music Week. Clear Soul Forces are a hip hop power quartet that represent D-town to the fullest – their recent album Detroit #REVOlutions encompasses everything organic about pure lyricism, “creating a combination of golden era, 21st century, backpack and sub-woofer rap hip hop music all while paying boisterous attention to their beat selection.” theflow are relative newcomers on the scene, but have been making waves with a series of cover videos that showcase the versatility of the 9-piece Toronto soul hop gang. Catch these four acts before they catch fire!

Notes to Self – Today [I Wanna] Video