Twelfth Letter – OWTH (Off With Their Heads) [Music] 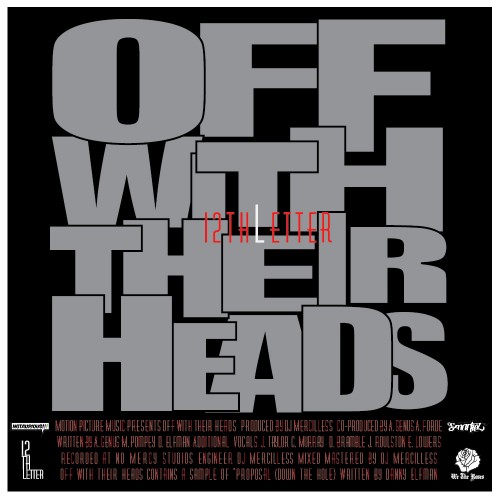 Twelfth Letter with some state fyah for his new track OWTH (Off With Their Heads).
Check out the dope track and his Thght Process Interview below.
Enjoy

UTW-Who am you?
L The 12th Letter-I’m an emcee from Toronto who goes by the name L the 12th Letter. I differentiate myself as an emcee as opposed to a rapper, because anybody who can spit a 16 can call themselves a rapper but it’s the MC who spits a bar and makes it stick to the hip-hop culture for years to come.


UTW-What is your Passion?
L The 12th Letter–It goes without saying that my passion is music. As an artist, the pallet I paint from is hip-hop but that doesn’t mean I’m limited to it; I am a lover of all music and a fan of the cultures of which they grew out of.


UTW-What’s your biggest accomplishment to date?
L The 12th Letter-This past year (2011), I released two mixtapes ((Just Rap June ’11, The Last 12 Months Apr ‘11) that have garnered a great fanbase and a lot of positive reviews in both Toronto and throughout the U.S. That’s definitely one of my greatest accomplishments as an artist. Personally, my greatest achievement has been overcoming the stigmas that are put on Toronto artists and carving out my own niche in an industry where you can be chewed up and spit out, only to have people anxiously awaiting my next projects and following my journey.

UTW-Perseverance is key in proving to yourself AND any detractors out there. We tell em’ “You thought wrong” what else would you like to say to any doubters right now?
L The 12th Letter-The only thing I say to the doubters is that I love y’all! I mean, making haters into people who believe in me certainly isn’t my main objective but by consistently putting out music and showing my drive as an artist, I do believe it’s something that will sway them towards becoming fans of the 12thLetter.

UTW-Thanks for everything, where can people find your work and get in contact with you?
L The 12th Letter–You can find my music on my Bandcamp(www.12thlettermusic.bandcamp.com), Facebook (www.facebook.com/12thlettermusic) and Twitter (www.twitter.com/Lthe12thLetter). On a last note, look out for me in 2012, because big things are happening and my music is going to be more accessible on various levels sooner than you think!